- First tell us about yourself.


I’m a Barnsley born, Lincolnshire based sport and film mad Headteacher with an obsession (well, it is!) for picture books and creative learning.


Can’t believe I’m coming up to my twentieth anniversary in teaching (having failed as an illustrator) and on the way I’ve spent a few years as a teaching and learning consultant as well as a number of leadership roles.


Never wanted to be a head at all but I wouldn’t have it any other way now.


Live in a rural village with my patient partner, two teenagers and two cats who are off their trolley.


It was never the plan. I had trained to be an illustrator and had a few editorial commissions but found it difficult without living in London or Oxford where publishing houses were. This was 25 years ago so you still trawled around these places with a portfolio. 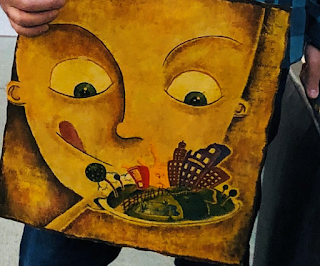 I saw Gervaise Phinn talking about school life on an old Esther Rantzen tea-time chat show. He spoke so inspiringly about teaching that it triggered something. A year later I was enrolled on a PGCE. I was shy and lacked confidence speaking in front of people but I enjoyed thinking creatively to help children learn. And I could use my art - that was my way in.


If I wasn’t a teacher I’d probably be a professional golfer, travelling the world, earning loads of money...or probably working in a bookshop.


- 2. What advice would you give for newcomers to twitter?


1. Read first. 2. Find people who have similar interests or views at first, then involve yourself in conversations. Everyone has something to offer. 3. Don’t be a wazzock! 4. Don’t become obsessed by followers - numbers don’t matter - squillions of followers doesn’t mean quality although it can sadly create false celebrity. 5. Be kind.


People like  @PaulWat5 and @smithsmm were so encouraging to me when I joined (properly) less than two years ago. From an educational perspective, Twitter for me is about sharing good stuff, whether that’s something you’ve used in school or a view you have. If you join in with someone ending in ‘Rocks’ you’ll make a good start.


Let’s get the obvious out of the way then. The obsession - well it is- with picture books progressed at art college really although Tintin and Asterix were always read as a child - and still are.


@MrMartinBurt and I were inspired by illustrators like Brad Holland, Maurice Sendak and particularly Lane Smith. We used to attempt to copy Smith’s style through his use of textures and muted colours.


Being on Twitter and meeting like-minded fellow book obsessives has opened up a wider world to what’s out there. I love collecting them but most of all I love sharing them with children and teachers. As a teacher a passion for books is a must and I think if you asked every child in school what I was most passionate about they’d say picture books.


I love sport - particularly cricket, golf and football and have always enjoyed film, particularly Scorsese and Tarantino but also those from the 30s and 40s. Also love a good musical.


- An eclectic mix. All round to Mr. Duke’s when lockdown ends.


- 4. What has been your favourite lesson ever?


I enjoy creating a sequence of lessons around a context. I produced a large scale map of an underground bunker which held an enigma coding machine from WW2. The aim was to write thinking of stealth as the children - in the role of time-travelling spies- made their way through the various rooms, had to create diversions for the guards and ultimately take the machine. The build up using drama worked really well and the children loved being in role.


It was probably inspired by the old board game Escape from Colditz and too much time spent on the PlayStation game Metal Gear Solid! Also created contexts around Amazonian adventures, Dinosaur Islands and a mansion murder mystery with great results.


- Besides Telly Savalas, isn’t he dead?


They brought Carrie Fisher back so its a possibility for Telly. If not, then @michaelsheen as he can play anybody or someone who can do a great Yorkshire accent...Sean Bean maybe. Despite being a Blades fan.


- You are missing the obvious.


I do have a Groot pencil holder in my office.


- 6. What is the best/worst teaching advice you’ve heard?


Find it difficult to remember specific advice which is why I don’t bother doing observations!


During my training I was at the point of failing. I had to have an additional observation to save the day. I might have ended up golfing after all. I was encouraged by my teacher mentor at the time to slow down and keep it simple. Don’t try to do too much. Still stand by that now - in everything I do.


The worst advice probably came when I just started teaching and dared to use film to teach. There was a real suspicion that film could not be used to teach reading and writing. How times change.


I was going to say a golf ball for the views but you get whacked constantly!


Twitter-wise, there are so many follow follows going on that it’s almost daily now. I think we just need to think about the reasons we follow or are followed. People may disagree and I think the intentions are good - the tiny voice one for example- but we’ll need to start creating new days of the week soon.


Outside Twitter - Barnsley are clearly the best team in Yorkshire - or at least we were in 1912. (Look it up!)


- 9. Which 4 living people would you invite to dinner?


Michael Palin’s always been a hero for pretty much everything he’s ever done so he can have a chair. Angela Lansbury would be great. Seen it all. . Ricky Gervais because he’s just brilliant. I think Bruce Springsteen would be pretty cool to have around for dinner. He could sing after too.


For reminding someone of Telly Savalas. Life doesn’t get much better.


Would love to nominate @mini_lebowski.


Enjoyed that, thanks for the nomination @Misterbodd

July 27, 2018
My next interview is with Primary Teacher, Jane. Otherwise known, mysteriously, as 'Miss C'. Introduce yourself, mysterious one. I’m Jane and I’m heading into my 3rd year of teaching. I trained with Year 1, did my NQT year with the most gorgeous Year 4 class and last year with some fabulous Year 2s. This year I’m sticking with year 2. I must admit, it feels good to be sticking to the same year group for once! What made you become a teacher? Oh gosh. Right, this is going to sound like a sob story fit for The X Factor or something but bear with me, it has a happy ending! Before I was a teacher, I worked as a healthcare professional. I worked mainly on intensive care and with the respiratory patients. I absolutely loved it. Unfortunately, I was also in an extremely abusive relationship for the entire time too. Now, people often assume that it’s the physical side of DA that is hardest to deal with but it’s absolutely not. Bruises heal. The scars that vicious
Read more