A bbc Interview with @watsEd

Mike is a Primary Teacher based in Lincolnshire. He has been teaching for 18 years and in that time he has taught across Key Stages 1 and 2, filling a wide range of whole school Senior Leadership roles, including Head of School.
He shares his blog and ideas at www.watseducation.com . He will be presenting at Lead Learn Lancs on September 30th. What made you become a teacher? It's the only thing I have ever seen myself doing. I don't think I'd ever even considered any other job. There aren't any other teachers in my family so I must just be a massive glutton for punishment! Now, I keep on doing it because it's fun. I've had good times, bad times and even worse times, but at the end of the day, what other job lets you have as much of a laugh, with such a clear sense of purpose!


What is your favourite part of the job?

- Ooohhh
Tough one... Planning and assessment obviously! Yes, that's right. You need them both, even though we all complain about them. I'm not talking tests here but the ongoing assessment that make the real difference. Once I know what chn can't do it's my job to find the best/most engaging/interesting/effective way to change it. That's the fun bit, working out what to do and putting it into effect. Of course working wth chn is great, but it's getting them to learn and progress that gives me the buzz!

What has been best thing you have done at work this year?

- I'm most pleased with the impact I've had on children's confidence in their writing. Especially a few children who have really found a voice where they didn't really have one before.
We've found a way to enjoy the process of writing and they are so pleased and proud of how far they have come. They are more willing to experiment with words and have learned they can do more with sentences than they had realised. It culminated in this simple exchange that blew their minds! 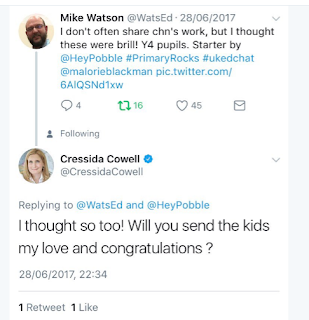 I agree, contacting Authors has been a revelation this year. We´ve interacted with Peter Bunzl and Michael Rosen.

What is the most frustrating thing about teaching at the moment?

- Teaching is frustrating (full stop). The most frustrating is, was and will doubtless continue to be the fact that it is a political pawn. Perpetually used by politicians to distract people. Education does badly under every government. Until it is led by someone who actually knows what it's about in schools - it will stay frustrating.

What songs would be on your driving to work playlist?

- I have one!
Billy Joel: We didn't start the Fire, Piano Man Muse: Map of the Problematique, Madness, Starlight, Plug in Baby Barenaked Ladies: One Week, Old Apartment Ed Sheeran: Lego House, You need me I don't need you Biffy Clyro: The Captain, Many of Horror Of Monsters and Men: Little Talks Ezio: The Further we Stretch And a few others! I have a mixed taste in music!
I love Barenaked Ladies, and Biffy. Not sure about Billy Joel, but each to their own.

What is the funniest thing a child has ever said/written in your class?

- I have to use some asterisks here:
When answering Maths SAT questions a few years back. "Explain why *Child* is correct." One child wrote "Because he's really clever." Another wrote "How the f**k should I know?" There's been lots over the years, usually involving misplaced expletives!

What is your guilty pleasure?

- Sometimes, when I have the TV to myself, I will happily sit and watch WWE wrestling

I've always liked it since I was a kid and to be honest I still do!

No shame there. Who doesn't like Lycra-clad grown men shouting.

If you weren´t a teacher, what would you be and why? A Wrestler?

- Like I said in Q1, I've never seen myself as anything else. I honestly don't know. A couple of years ago I was close to leaving the profession and was looking for something different and couldn't find anything I was qualified to do! As long I was able to earn 6 figures and there was no work at home... that'd do!

A bit mercenary, Mike! We´ve all been there though. It´s a difficult job, but most of the time the advantages outweigh the downfalls.

What are you passionate about (teaching-related or not)?

- Cricket: England's need to find a long term replacement for Jimmy Anderson and a decent opening batsman to support Alistair Cook Teaching: Making it fun(ish) and getting the kids working and learning outside - though I need to do this more next year as I haven't done enough of it this year!

If you had to pick one subject/topic to teach on a loop forever, what would it be?

- Something historical... probably The Vikings, I'm no expert but it's a theme I really enjoy. The problem is I have a short attention span ... so I'd still get bored really quickly!

What is the most effective resource/technology/app you use in the classroom?

- Aside from Pencil and Paper?
ExplainEverything is my winner there. If I was told I could only have one app... that would be it. It lets you do so much in terms of information collection and presentation. You can produce something quite professional with a just a little effort. Although TTRockstars has been transformational too this last term... never seen kids so excited to do any work on multiplication tables!

I too have seen the impact of Times Tables Rockstars. I´ve never seen children so keen to practice.

What is the most effective routine/method/system you use in the classroom?

- Right now, shaking every child's hand as they enter first thing in the morning and a personal greeting. He next 5-10 mins has been described as like 6th form common room, where kids chat, with each other and staff, they sign in using ClassDojo, then when I say to come and sit down they do because they've got the chatter done. This is with Y3/4 children and I've never had more happy and relaxed children.

I chickened out of the Handshake after hearing about it at Primary Rocks, wish I had started it straight away. I´m definitely using it next year.

If you had to pick 4 people (Twitter or otherwise) to invite to a dinner party who
would it be and why?

- Oh blimey! That's really hard... Graham Andre @grahamandre: because he's life and soul of the party and makes me laugh hysterically. Tim Taylor @imagineinquiry: because he's a voice of calm and measured reason in education and an all round lovely fella. Sophie Merrill @MissSMerrill: because she'd bring the beer! Simon Smith @smithsmm: because I would very much enjoy the conversation about children's picture books - as long as he brought some with him!

What is the best and worst advice you have been given as a teacher?

- BEST:
I really good HT reminded me "Don't sweat the small stuff." The to-do list is endless. So first of all do what directly affects the children, then what affects the class, then what someone else wants you to do. If you can't fit the last things in in a reasonable amount of time. Don't worry. The kids should always come first. Sound advice. WORST: An old DHT told me to go into a particular class hard, zero tolerance and take no nonsense, I did. It was terrible as the children in no way needed it and it took me ages to get them back on my side, and a couple I ever did. It said a lot me about him as a teacher than those children as learners. Know the kids and avoid preconceptions - how they were doesn't always match how they will be.

I agree, always find out about a class, and individuals, yourself. Sometimes it just takes a fresh start, or a different way of dealing with individuals. I love teaching ´that class´.

Final Question: What drives you as a teacher?

- An old blue Astra! Clichéd, but it's making a difference to those children you see everyday. Not just the teaching but helping them grow into well rounded individuals, who understand not only themselves but others too. If I didn't enjoy it, I wouldn't do it! I mean who would?

If you could choose one person who you´d love to have the bbc Interview treatment, who would it be and why?

Proof that while he knows his onions when it comes to teaching, Mike can´t count to one.

July 27, 2018
My next interview is with Primary Teacher, Jane. Otherwise known, mysteriously, as 'Miss C'. Introduce yourself, mysterious one. I’m Jane and I’m heading into my 3rd year of teaching. I trained with Year 1, did my NQT year with the most gorgeous Year 4 class and last year with some fabulous Year 2s. This year I’m sticking with year 2. I must admit, it feels good to be sticking to the same year group for once! What made you become a teacher? Oh gosh. Right, this is going to sound like a sob story fit for The X Factor or something but bear with me, it has a happy ending! Before I was a teacher, I worked as a healthcare professional. I worked mainly on intensive care and with the respiratory patients. I absolutely loved it. Unfortunately, I was also in an extremely abusive relationship for the entire time too. Now, people often assume that it’s the physical side of DA that is hardest to deal with but it’s absolutely not. Bruises heal. The scars that vicious
Read more